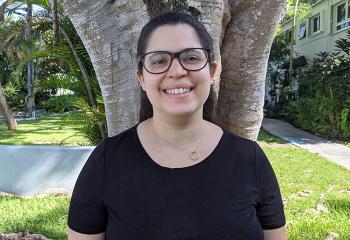 Growing up in Florida’s Dade County, Caitlin MacLaren developed an early awareness of the imbalanced relationship between humans and the environment.

MacLaren was eventually drawn to nursing, in part because of what she refers to as, "the ability to apply tangible skills to help people in an immediate way." She never lost sight of larger, social issues and the importance of advocating for systemic change.

Soon after joining the staff at Miami’s Jackson Memorial Hospital in 2018, that same ethos led her to become a climate champion and an agent of sustainability within Jackson Health System.

For MacLaren, the effects of interactions between humans and the natural world have become clearer as the climate crisis has intensified.

Everything that we’re concerned about is wrapped up in the climate crisis: housing, clean water, clean air, and equality," MacLaren says. "There's no way to build an equitable society if people are fighting for their lives – which people already are, and will continue to be, if we don’t take action."

Working as a transplant nurse at a safety net hospital, MacLaren sees many people who are being disproportionately affected by climate change.

"It's hard to discharge people with health advice when you know that their living conditions are presenting challenges and that they’re experiencing difficulty meeting their basic needs," she says.

Fortunately, MacLaren works with a number of people who share her concern and commitment. Together, they formed a climate committee, a group which originally formed as a subcommittee of the local chapter of Service Employees International Union and then became a labor-management partnership initiative. The committee consists of professionals across the hospital, including social workers, physicians, nurses, case workers, and IT staff, all bonded by a common concern for the environment and shared desire to improve sustainability.

On behalf of the committee, MacLaren began to investigate available resources and reach out to existing networks. Her research repeatedly brought her to Health Care Without Harm, Practice Greenhealth, and the Nurses Climate Challenge. With resources from the organizations' websites in hand, MacLaren's committee partnered with Florida Clinicians for Climate Action and conducted a webinar for union members on the connections between climate and health.

MacLaren and her colleagues gave a presentation on climate justice to Jackson Health System administrators. The team used ready-made slides from the Nurses Climate Challenge about the health impacts of climate change to establish their case.

They focused on how environmental justice and climate action is a form of preventative health care, especially because more patients will experience chronic conditions, such as congestive heart failure and asthma, that are worsened by heat and poor air quality. They made the case that climate action is an integral part of Jackson Health’s mission as a safety-net hospital serving the most vulnerable people in Miami.

The committee suggested that joining Practice Greenhealth would be the logical next step for them, as it would provide the expertise and guidance needed for the committee’s passionate clinicians to prioritize areas for improvement, identify best practices, and implement solutions.

Although Jackson Health System just recently became a Practice Greenhealth member, they have already begun the network’s baseline assessment and are establishing goals for decreasing their environmental impact.

Today, the climate committee is the driving force behind the sustainability efforts at Jackson Health and works to implement sustainability initiatives with the support of Practice Greenhealth. MacLaren continues to facilitate the committee and hopes one day the system will pursue installing solar panels atop the roofs of the hospital’s buildings and parking garages.

For other clinicians planning a similar presentation to leadership, MacLaren recommends the use of explicit examples of the intersection of climate change, public health, and patient outcomes whenever possible. For example, as a transplant nurse, she treats many patients with chronic kidney disease, which is exacerbated by extreme heat. Illustrating the quantifiable connections between climate changes and patient health brings the impact to life.

MacLaren also urges other clinicians not to hesitate to follow her group’s example. In fact, Jackson Health leadership’s response was so positive that the committee wished they had made this request earlier.

"Climate change is a health emergency, and it's not something we can run from, or say 'that’s not my specialty.' We're all ultimately going to be impacted, both personally and professionally, by climate change. So, better to engage now, as soon as we can, because it is going to affect our patients, and we'll be seeing the effects more and more," MacLaren says. "As health care professionals, we have an obligation. If you see something, you speak up about it."

Caitlin MacLaren lives in the neighborhood where she grew up, an unincorporated community in Dade County. She, her husband, and her daughter will soon be joined by another child.

It’s easy to get started: